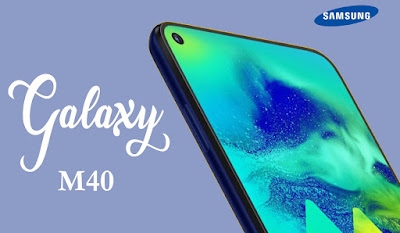 The Samsung Galaxy M40 has been officially launched at a price of Rs 19,990. The new Galaxy M-Series will start from June 18. Talk about Galaxy M40's status, it has full HD Plus Infinity O Display, Triple Rear Camera Setup, Octa-Core Snapdragon 675 SoC. This is the first smartphone in its segment, in which the screen sound technology is present.

Price and launch offers of Samsung Galaxy M40 in India: 6GB RAM + 128GB of storage variant is priced at Rs 19,990. Phone sale will be available from 12PM to 18 June on Amazon.
In the launch offers of Galaxy M40: Reliance Jio subscribers will get double data benefits for recharging a prepaid plan of Rs 198 and Rs 299. Subscribers of Rs.1810 will be saving more than Rs.3310 on recharge. Vodafone and Idea users will get a cashback of Rs 3750 on the recharge of Rs 255. Cashback will get up to 50 recharge as recharge vouchers of Rs 75 Apart from this, consumers will get extra 0.5GB of data per day for 18 months.

Samsung Galaxy M40 Specifications: Galaxy M40 is the first phone in Galaxy M-Series that comes with " Infinity O display". The selfie-camera is given as a hole on the phone's corner. The phone has a 6.3-inch FHD + LCD display and top Gorilla Glass Protection. There is no earpiece in it. Instead, the sound technology has been used in the phone. In Galaxy M40, Samsung has also removed the 3.5mm headphone jack, but the company is giving Type-C earphones with the box as well.

The Galaxy M40 has a 6GHz RAM with a 2GHz octa-core Snapdragon 675 chipset. The phone has 128GB of internal storage, which can be increased to 512GB with the help of MicroSD card. Talking about the camera department, triple rear camera setup is provided on the rear of the phone.

It has 32MP primary camera, 8MP ultra-wide angle and 5MP depth sensor. The front camera in the punch-hole cutout is 16MP.